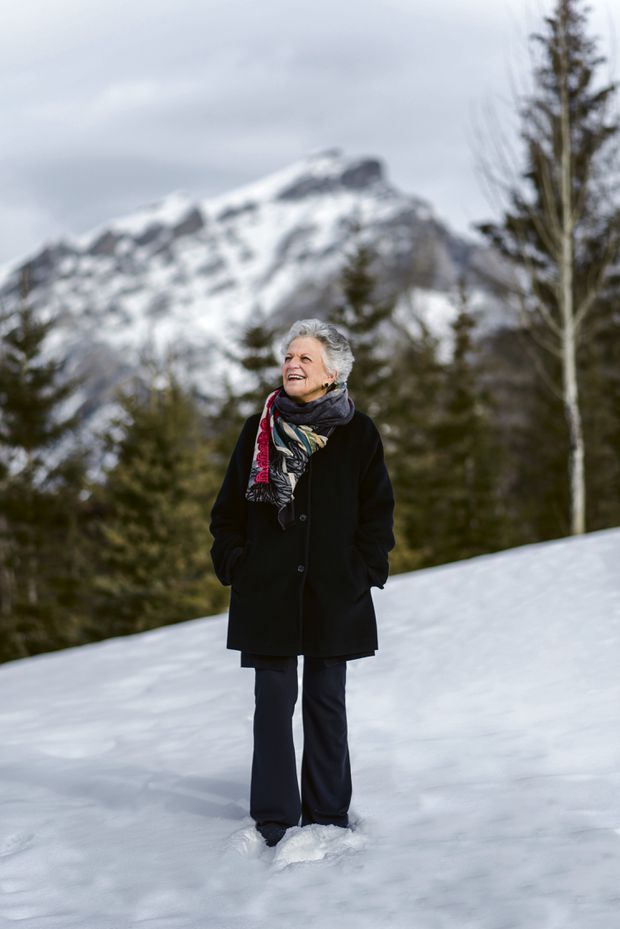 Marsha Leederman
The Globe and Mail
Published on: November 3, 2020

It started with the seats. Jenny Belzberg, a regular and long-time patron of the Eric Harvie Theatre at what is now the Banff Centre for Arts and Creativity, has for a long time found the venue’s seats to be a problem. As wonderful as a performance might be – an opera, for instance, or the string quartet competition – her knees rubbing up against the seat in front of her could prove a distraction.

“If it did it for me, can you imagine if a tall man was sitting there,” says Mrs. Belzberg, 92.

So it was one of the first issues she raised to Janice Price. Weeks into Ms. Price’s tenure as the Banff Centre’s president and chief executive officer in 2015, they were both attending a classical music concert, and were chatting at intermission when Mrs. Belzberg raised the subject.

“She said someday I’m going to help Banff Centre … renovate this theatre, because the seats are so uncomfortable,” recalls Ms. Price. “So, honestly, the very first time I met her, it was a conversation.”

The renamed Jenny Belzberg Theatre officially opens this week, a more than $7-million revitalization project largely funded by Mrs. Belzberg and designed by KPMB Architects. Construction began a year ago and continued through the pandemic, allowing the project to be completed on time and on budget.

“The design is quiet elegance,” says Mrs. Belzberg, who visited the theatre on Saturday. “You know, the colour needs to come from the audience and the actors onstage, not from the surroundings.”

The gift is being called “transformative” – the amount of the donation has not been disclosed, but it is in the millions, and one of the largest private gifts the organization has received.

And the theatre has been transformed, with improved acoustics, sightlines, health and safety features, and a balcony with seating that encircles the room. There are also larger and rewired technical booths, improved wiring to accommodate future technological needs and, of course, more comfortable seats – 638 compared with the previous 930, allowing for a more intimate experience for the audience. Once audiences are allowed back in, that is.

Mrs. Belzberg, who tested out potential seats herself last February, says when the revitalization announcement was made during an event at the theatre, a patron approached her and thanked her. “He said now I won’t have to wear shin pads on my knees,” she recalls.

The revitalization was led by Marianne McKenna at Toronto-based KPMB Architects, who says the project was challenged by – but ultimately benefited from – the constraints: the original concrete Brutalist structure, the impossibility of rebuilding in the national park and funding.

“Because the budget was so incredibly tight, we pitched to reline that concrete box with a new wood insert and in that we would change the topography,” Ms. McKenna says. “And into the wood liner we would make a better acoustic shell, because performers would dread playing in that hall.”

There were also improvements to broadcasting potential.

Mrs. Belzberg, who was the Banff Centre’s board chair from 1987 to 1991, had an unusual level of engagement and involvement – more than in a typical donation process. While she did not have a say on the choice of architect, she was there for that pitch meeting. It began with a single comfortable theatre chair. “Just to say we know what you want. And here’s how we’re going to give it to you,” Ms. McKenna says.

“I’m very excited about what’s happened there and the kind of leadership and inspiration and the determination of, I would say, many women to make something happen,” Ms. McKenna says.

Mrs. Belzberg, who lives in Calgary, where she was born, has been an involved and respected figure throughout the project. When she visited the theatre in early October – before those seats were installed – she was presented with a bouquet of flowers by the president of the CUPE union local.

It’s what the team views as the first phase of a larger theatre redevelopment – one that will later include a new lobby and, another one of Mrs. Belzberg’s top priorities, improved bathrooms. There is a master plan for the larger project, what the Banff Centre is calling the performing arts and learning complex, “on the books for whenever one can run a campaign again,” says Ms. Price, the Banff Centre CEO.

The theatre opened in 1967, named in honour of Eric Harvie, a business leader and passionate supporter of arts and culture. It has been renamed with the approval – which Mrs. Belzberg specifically asked for – of Mr. Harvie’s family; his great-nephew, also named Eric Harvie, sits on the Banff Centre’s board. The lobby space will continue to be home to a bust of the late Mr. Harvie’s image and a larger tribute wall is planned.

A gala to mark the opening had been planned for Dec. 13, but that is not happening owing to the pandemic. Instead, tours are being offered for locals – physically distanced and with limited numbers, from Nov. 12 to Dec. 12. Beyond that, the centre is considering offering performances from the theatre for remote audiences until they can have people in the theatre again.

Mrs. Belzberg says the arts enriched life for her and her husband and notes that she has been spending a lot of time during the pandemic watching classical concerts on YouTube. “It’s very important in our society and it helps us through these terrible times," she says, of the performing arts.

And she is thrilled with this legacy. “This is for me and for Hy, to be remembered that we were here once,” she says, referring to Hyman Belzberg, her husband of 68 years, who died in 2017. “In our own family, nobody’s [in Calgary] any more and I want to leave something here.”