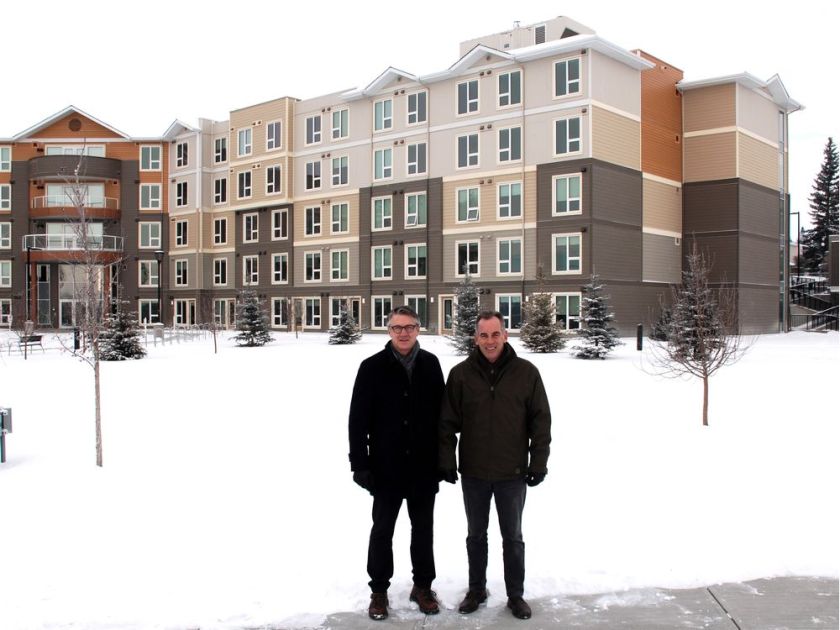 Designed by Zeidler Architects and built by Clark Builders, it was finished on time and on budget thanks to the watchful eye of Target Project Management (TPM) that had been working with the project since it was first planned. Now, a building permit has been applied for so that Phase 2 with another 45 units can begin construction shortly.

Under construction and on schedule to be completed by May thanks to TPM is another residential-type project for the John Howard Society. A new community services building, administrative offices and Bedford House — transitional housing with 32 beds for men exiting the justice system — is on a site along Builders Road S.E.

TPM principals Bruce Chapman and Dave Skaret have earned a fine reputation in the project management sector in this city, guiding owners through budgets and scheduling while helping select the best architects and contractors for the job.

They met when they both worked for the former Cohos Evamy architectural firm. Chapman graduated in architectural sciences with a major in project management at Ryerson University in Toronto. He moved to Calgary in 1987 to join Cadillac Fairview, working with regional shopping centres in Lethbridge, Saskatoon and Regina.

At Cohos Evamy, he worked on the Rimrock hotel in Banff and the Westin in Calgary where he was hired on as director of engineering for the downtown property. That led to a number of other assignments over a three-year period with Westin Hotels as director of facilities.

Then, Chapman decided to launch his own company and TPM became a reality in 1999 in the basement of his home. He had worked on the hotel chain projects with a project manager based in Seattle and partnered with him to handle several project management assignments for Blackstone, a real estate private equity firm based in New York.

In Calgary, Chapman worked on a major expansion at Fairmont Chateau Lake Louise, realigned the retail at Westbrook Mall and began a long association with the Banff Centre for Arts & Creativity that has been ongoing for 15 years.

It has been a wonderful relationship for TPM that has included major expansions over the years with construction projects such as the Donald Cameron Centre, Lloyd Hotel, Sally Borden Building and the Kinnear Centre for Creativity and Innovation.

Skaret is an architectural technologist who worked with Cohos Evamy for five years before joining Gibbs Gage Architects, then hooked up with Chapman again when he was invited to join TPM in 2010.

The principals and their staff in the office on 19th Street N.W. have completed a number of exciting projects, including the challenging extension to the Kahanoff Centre that houses the new Decidedly Jazz Danceworks, the Osten & Victor Alberta Tennis Centre and the prestigious renovation to the bar and in the Delta Hotels by Marriott Downtown.

Hotels continue to be a major client for TPM, with a renovation to the Delta Calgary Airport, the impressive Marriot Hotels complex on the former Alberta Boot site at 5th Street and 10th Avenue S.W. that will open to welcome guests next month, and a major renovation of The Delta Bessborough Hotel in Saskatoon.

TPM is also busy with Phase 2 of the renovation of the food and beverage areas of the Glencoe Club that will provide members and guests with new dining, banquet and bar areas designed by the talented Frank Architecture & Interiors.

Roofmart, a national distributor of roofing and siding products, engaged TPM to project manage stores throughout Western Canada that includes a new build in Aldersyde, and a renovation and addition to the retail store, warehouse and storage facility on its 6.5-acre site on Fairmount Drive S.E.