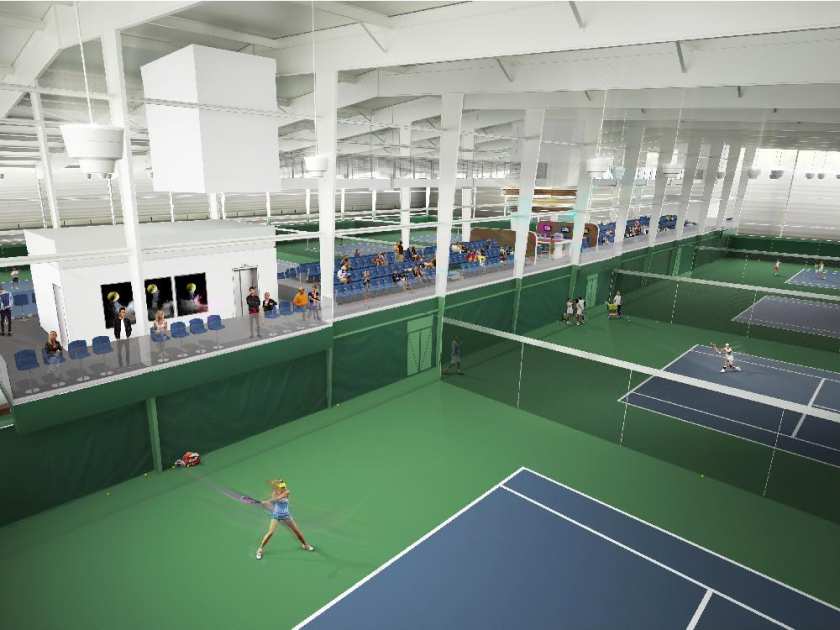 Calgary could become one of the country's top breeding grounds for fledgling tennis players with the construction of an $8-million, state of the art, year-round facility pegged to open next spring, says the head of Tennis Alberta.

On Friday, officials from the city, Tennis Alberta and Tennis Canada will gather at the future site of the Acadia Tennis Centre in the city's southeast.

Construction has already started and the facility, which includes eight indoor courts, a 400-seat mezzanine, fitness area and pro shop, could open to the public by March 2016, said Glen Scott, president of Tennis Alberta.

"There is a paucity of available indoor tennis courts to the public in Calgary and Alberta," Scott said. "This effectively, overnight, almost doubles the amount available."

According to Scott's organization, Calgary has just 14 publicly accessible indoor tennis courts — well below the 120 indoor courts the city could maintain to accommodate growing demand triggered, in part, by the success in recent years of professional players from Canada.

"It will go a long way to certainly meeting the immediate demand, but there's more to be done for sure," Scott said.

"It will be the first and only provincially … operated tennis facility in the country, which really gives the provincial sport organization the ability to do programming, grow the sport and keep reinvesting funds into the sport," he said.

"It takes us from the bottom two quartiles and puts us right up in the top quartile if not at or near the top (of the country)."

The Acadia Tennis Centre was years in the making. An earlier proposal to build the facility at WinSport fell through and the city's booming real estate market made residential and commercial property development more profitable.

The city then offered to lease vacant land at the Acadia Athletic Park for $10 a year but would not pay any capital costs.

The provincial government kicked in $2.4 million, and in late 2013 Tennis Canada launched an ambitious initiative to raise $5 million in three months and begin construction in 2014.

Scott said the $8-million price tag has increased slightly because of the decline of the Canadian loonie over the past eight months and required components have to be purchased from U.S. manufacturers.

The new indoor courts will also include technology that maps the trajectory of a serve and high-resolution video imaging for tracing stroke motion.

Additionally, a grant from the Calgary Parks Foundation will fund the refurbishment of six existing outdoor courts, which could be reduced to five courts to meet international standards, said Scott.